We’re proud to welcome the founders of Falmouth, Nova Scotia’s Pothier Motors, Jackie and Tom, to The Crossing.

Jackie and Tom met and fell in love in Bedford, founded a business and raised a family in Falmouth, and have spent their retirement years proudly watching that business continue to grow and thrive under the guidance of their sons and grandson. They recently joined our growing community at The Crossing, and we had the pleasure of sitting down with them to learn more about their life together.

When we arrived at their new home, we were warmly ushered in by the always well-dressed couple. We sat on their back deck to talk, which allowed us to listen to the summer rain on the roof and watch the chipmunks, or ‘chippies’, as Jackie fondly calls them, scurry about in the distance. Here is a small glimpse into their captivating life. 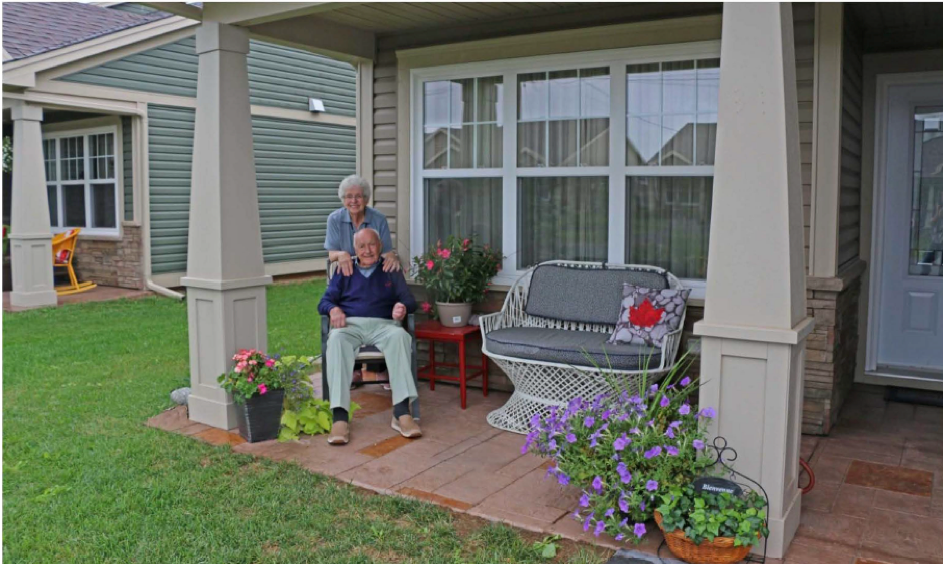 Jackie has strong Atlantic Canadian roots, as her mother was born in Cape Breton, Nova Scotia and her father was raised in Hampton, New Brunswick.
Jackie’s mother welcomed five daughters into the world before passing away during childbirth, and Jackie and her four sisters were subsequently raised by her devoted father. Her father worked on the railroad and was transferred to Quebec, and then Bedford, Nova Scotia where the family settled and Jackie attended a catholic school.

Tom was raised in Wedgeport, a small fishing village in Yarmouth known for its abundance of tuna. At just 16, Tom joined a group of older boys as they made a trip to Halifax to enlist in the military. Hiding his age, Tom joined and served in Newfoundland before starting a bodywork career in Bedford. When asked what led him to leave the military and begin a career in bodywork, Tom flashed his famous smile and with a twinkle of mischief in his eye said, “that’s where the money was”. It was also his career in Bedford that led Tom to meet his wife of 68 years, Jackie.

Jackie fondly remembers Tom trying to catch her gaze while she was singing in the church choir. She also recalls that Tom would coincidently appear on her road when it was time for her to walk to school. With five daughters to watch out for, Jackie’s father was very strict. Once Tom gathered the courage to ask Jackie on a date, they often had to sneak around. Discouraged with the situation, Tom walked right up to Jackie’s house, knocked on the door, and introduced himself to her father. Jackie says, “my father liked him straight away after that” to which Tom replied, “he was a great man”. After dating for one year, Jackie and Tom married in 1950 at the Saint Mary’s Church.

Moving to Windsor and Starting a Family

As newlyweds, money was tight. Jackie and Tom initially lived with Jackie’s father while Tom continued to work at a body shop in Bedford. Known for his excellent bodywork skills, Tom was soon offered, and accepted, a job working for Tom Haley at Tom Haley Dodge in Windsor. Jackie and Tom then moved to a small apartment in Windsor where they lived for about four years before starting their family. They adopted their first child, Patti, when she was 5 months’ old. Shortly after, they welcomed their second child, John, to the world. Sons Phillip and Jamie followed.

Never one to stay idle, Tom used what little spare time he had outside his new job to do bodywork in his backyard for extra money. A pivotal moment occurred when Tom had to quickly repair a hearse, but couldn’t find the necessary parts. Instead of giving up, Tom decided to make the parts himself. Jackie often found Tom sleeping in that Hearse between paint jobs. Despite the stress, the hearse was completed in time and Tom received a handsome tip that the young couple used to purchase a television. Jackie proudly remembers being the first people in Hants County to own a television. It was at this moment that Tom decided to leave Tom Haley to open Pothier Motors.

The early years of Pothier Motors were tough. Tom worked around the clock on vehicles, and Jackie acted as both bookkeeper and entertainer, frequently welcoming clients into their home for sales dinners. As they lived on the same property as the dealership, there were no days off. When asked about their hobbies during these years, Jackie and Tom laughed – aside from work, they had no hobbies!

Through hard work and dedication, Jackie and Tom grew Pothier Motors from a body shop to include a Volkswagen franchise, and then transitioned it to the Chrysler, Dodge, and Jeep franchise that is still there today. They instilled a strong work ethic and the same customer service skills into their family, and Pothier Motors is now led by three generations. In 1986, Jackie and Tom handed the reigns to their son, John, who continues to serve as president of Pothier Motors today. Their youngest son, Jamie, rejoined Pothier Motors in 2017 as a finance specialist, and their grandson, Chad, is the general manager and vice president. Their beloved son, Phillip, was Pothier Motors’ Sales Manager for many years before recently passing away. Phillip is dearly missed by his family.

Jackie and Tom are thrilled to see the business remain in the family, although Jackie admits to being ‘a bit nervous’ when Chad first mentioned plans of building a new facility. The new facility was unveiled at the 60th anniversary and grand reopening in October, 2017. An event that Jackie and Tom proudly attended and thoroughly enjoyed.

When they first retired, Jackie and Tom spent time with friends and family at their cottage and frequently vacationed in Florida – although they would often pick up boats and other items for clients of Pothier Motors while they were there! In their beautiful home in Falmouth, they enjoyed making memories with their grandchildren and great grandchildren, lovingly welcoming pets into their home, and chatting with their neighbors. Jackie was always counted on to have a jar of candy handy for the neighborhood kids, and the community excitedly anticipated Tom’s grand Christmas display each December.

Moving to The Crossing

After Tom experienced a few frightening falls on the staircase in their home, Jackie and Tom, at the encouragement of their sons, began looking to downsize. The first building they visited was an apartment building with an elevator. It was a hot day, the apartment was stuffy and uncomfortable, and the elevator was on its last legs. They weren’t impressed! Their next stop was The Crossing. They loved it instantly, and Jackie remembers saying, “this is where I want to be”. Now that they are getting settled, they have been entertaining many friends and family members – some of whom they are encouraging to move here! They love living in a one-level home, and have become fast friends with their neighbors.

They find the community very friendly, and are happy to have remained in Hants County where they are close to their family. When asked about their future plans, Jackie and Tom say they are just looking forward to relaxing and enjoying their new space. Although, Tom has already been spotted puttering around in the yard and shining up Jackie’s car in the driveway!

Welcome to our community, Jackie and Tom. We look forward to seeing you around.